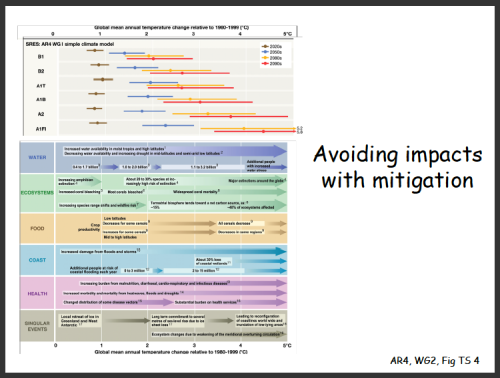 Look at the chart above carefully. What do you see?

I see a stuffed chart with some legible text, some visual cues as to where I should be looking and code that I don’t understand. (and yes, I noticed the comic sans type too). It isn’t a complicated document, yet it could potentially be to someone who isn’t familiar with how to read it.

This was a slide in a presentation given at the United Nations Framework Convention on Climate Change’s 15th conference in Copenhagen (2009). The event was titled “IPCC Findings and Activities and their Relevance for the UNFCCC Process.”

This isn’t even that bad, but it’s not what it could be.

If we want people to understand a subject matter and how urgent it is to address the matter, we want it draw people in. It’s the difference between saying “wow that’s amazing” and “I guess that suffices.”

Scientists aren’t communicating with us yet, and that’s a fact. They’re mainly communication with each other, which means using jargon that will fly pass our ears.

The Christian Science Monitor wrote a few days ago, “The American public is generally illiterate when it comes to science (so says the National Science Foundation). And when American scientists complain about public illiteracy and lethargy on the vitally important subject of climate change, they also have themselves to blame.

Generally, those who know the most about climate – and other important scientific fields – are locked up in their university ivory towers and conference rooms, speaking a language only they can understand.

And they speak mostly to each other, not to the general public, policymakers, or business people – not to those who can actually make things happen.

This is dangerous. We live in an age when scientific issues permeate our social, economic, and political culture. People must be educated about science and the scientific process if we are to make rational and informed decisions that affect our future. Indeed, a well functioning democracy requires it.

But instead, the relative absence of academics and academic scholarship in the public discourse creates a vacuum into which uninformed, wrong, and downright destructive viewpoints get voiced and take hold.”

This is exactly what frustrates me so much. It’s that lack of good communication doesn’t just hinder progress, it pushes us backwards into a hole of misunderstanding. It makes being judgemental and ignorant easy.

As designers, we have the potential to solve a lot of these types of problems. We can bridge the communication gap between the technical experts and everyone else. We need better. 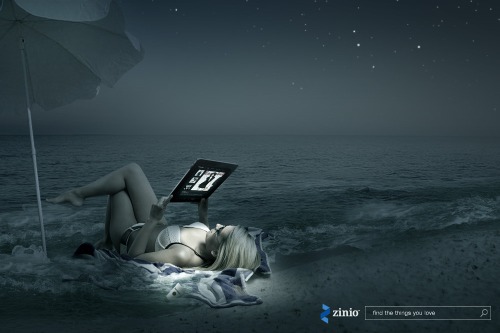 This is some of the best digital manipulation work I’ve ever seen. The images Ferdi makes appear so real and are at the same time so imaginative. On top of that, I love how easy it is to understand the message being conveyed by them.

Definitely go check out the rest of his work here: http://ferdi-rizkiyanto.blogspot.com/

This is pretty awesome for people like me who want to avoid getting grease all over their hands when they eat pizza. Designed by: Yu Kyung Ha, Won Min Jung & Kwon Young Hee