“What is that?” The guy next to me on the plane exclaimed, staring at my iPod.

Yes, I still use my iPod classic when traveling, because it carries thousands of songs that I can listen to without having to drain battery or data from the more important devices. It essentially has one function, but it works really, really well. I had to explain all of this to my seat neighbor when he shook his head, vehemently disagreeing with me from the look on his face. The fact that I even carried an older device was clearly a crime to him.

Nevertheless, it occurred to me that I’ve had this reaction before when I see people carrying around flip phones. Don’t you want apps on your phone? At least for Maps or Weather?  The answer I often get it is “I can get around fine without it.”

The truth is, having a phone with limited functionality is still pretty functional. It allows you to constant people without aimlessly distracting you wherever you go. This has been discussed at length in other blogs and online magazines, but it really hit me in the face this past weekend.

I’m currently in Zurich, Switzerland on a business trip. On the way to the hotel, I found myself needing to check the reservation info. 5 minutes later, I was in another app browsing the news. The taxi stopped momentarily at a red stop during the trip, causing me to look up. Outside my window were charming bridges and canals. Pedestrians waited as the tram rolled by. The Swiss flag flew quietly in a number of stores. The city was in front of me.

I’m in Zurich, I thought to myself. Why am I looking at my phone instead of out my window?

Our mobile devices can do a lot for us, and for the most part, they help make information and tools more accessible. But they also cause us to seek out information when we don’t need to. When we have a 200 apps, we tend to spend time looking at the content inside them rather than outside in reality. It’s much too easy to keep scrolling, swiping and tapping.

In an age when we’re constantly connected through the web, having a single-function device sounds …like a relaxing time. 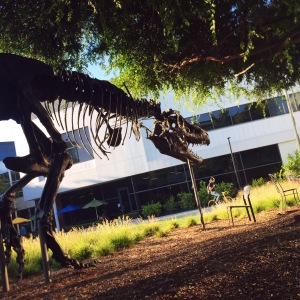 It was 7:30am. You could see the sun rays beaming through the palm trees and fun-colored lawn chairs. I was early, but there was already a line of about 30 people waiting to go inside Building 46. I walked over and chit chatted with a few of them. Around me were engineers, lawyers, teachers and a recruiter.

“How does a recruiter get hired?” Someone asked me out of earshot. I shrugged.

This was the start to a week-long orientation of a new job that comes with amenities that rival universities’ — a soccer field, tennis courts, free access to certain museums, massages, food all around and, most importantly, incredibly smart people.

My initial thoughts of being on campus were something akin to “This is a utopia. Everyone rides rainbow-colored bikes, there’s infinite free coffee and the weather is perfect every single day. This can’t be real.”

Then, it began — the funneling of information into my brain. Everyone spoke in acronyms and used words I didn’t know. The first two weeks were as much about gauging my whereabouts and expectations for work as they were about expanding my vocabulary. I tried to remember it all — the internal slang, people’s names, the different ongoing projects, the ways to install or receive x, y and z. I felt like I was being hurled through some version of the Large Hadron Collider.

It dawned on me that this experience would never truly end. Every day, there was more to learn and more things that I would be curious about. But it also became more manageable. I began to figure out where I was supposed to go and who I could talk to about various subjects. The panicked feeling of not knowing what was going on around me subsided and has been replaced with a steady hum of tasks and questions.

It’s been over a month now, since I’ve joined Google.

I’m working with a fantastic team of people who are thoughtful, friendly and open. They are also fiercely intelligent and push me to think with more focus about my work.

Unlike the small startups I had been a part of in the past, Google is teeming with people who I’ve never met before and some of whom I will never have the opportunity to meet. But it’s clear that people here want to create impact through their work.

It is ultimately about the work. The amenities are all you hear about when you’re looking in from the outside, but at the end of the day, the actual work I’m doing is most interesting to me. It’s my favorite part of being here and I can’t wait to see where it’ll go.