This amazing planter, Lua, gives your plant emotions! It uses sensors to measure the soil’s moisture, temperature and light exposure. It also measure your movement, so it peers at you when you walk by. The emotions help you know when it’s thirsty, sick, too hot, etc.

I’m always a sucker for sustainable houseware and packaging of any kind. Gaurav Wali uses pine needles here to create holders and organizers. He uses natural binders and waxes to make this a completely bio-degradable product. The material can also be colored with natural dyes made from vegetables and spices. What a cool way to use something that’s all around us!

I would use this Twin Utensil Set daily. When you switch from chopsticks back to western utensils, there’s even an interlock between the fork and knife so that they become one interlock.

A bookshelf that stacks vertically and doubles as a staircase so you can reach the top shelves. Made by Danny Kuo.

The floor chair. Simple in form and graceful to look at. By Jordi Ribaudi.

The flexible ladle that gets into all the corners. This is so smart. Well done, Jeho Yoon. 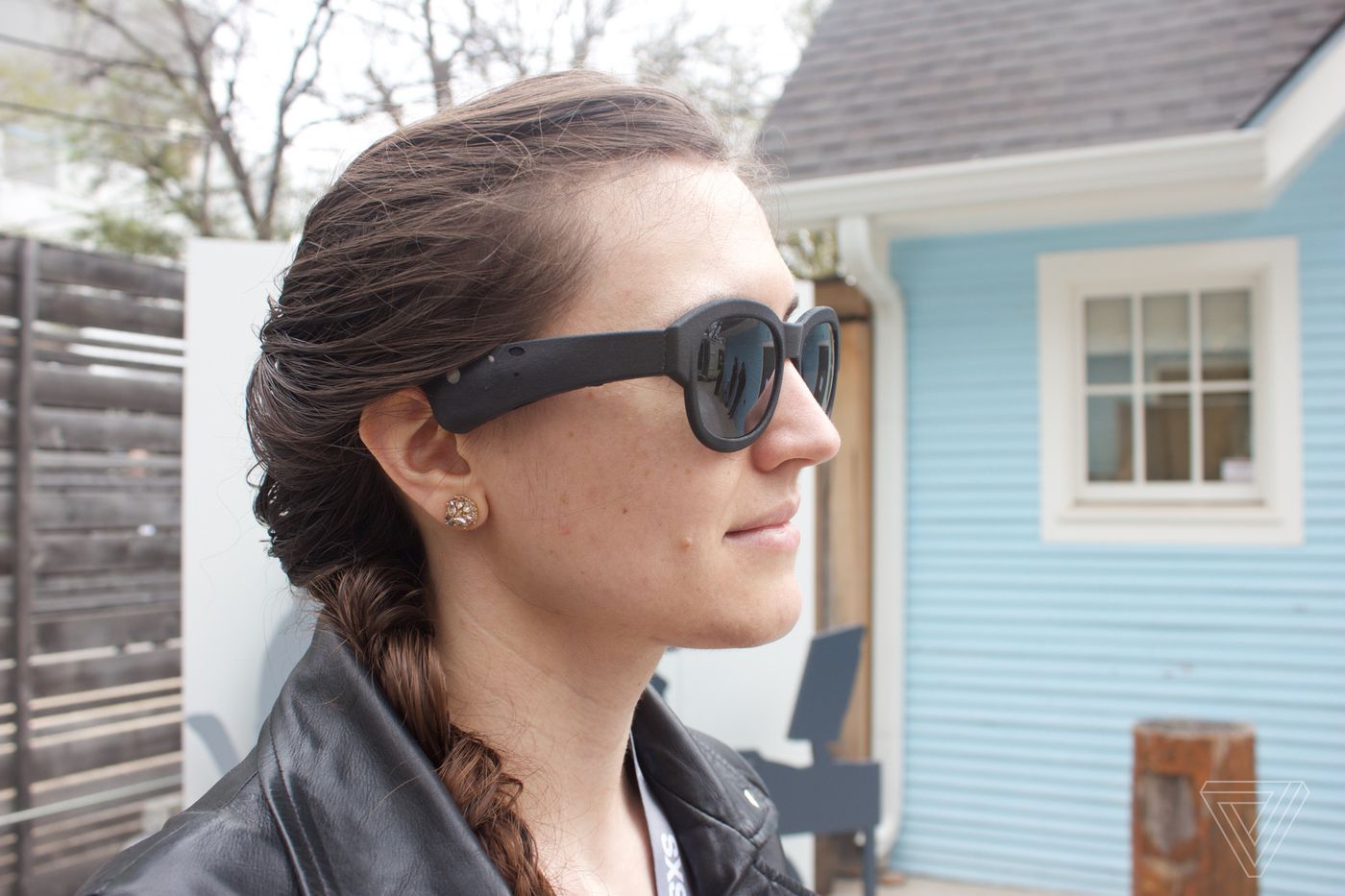 …can be beautiful. I have a fascination with well-designed ones. 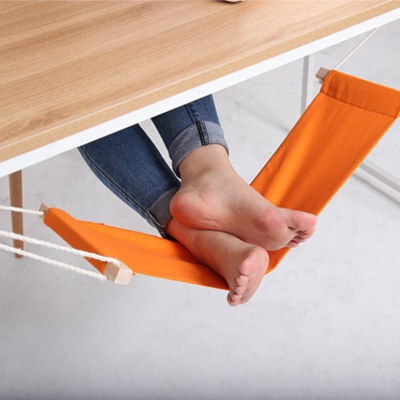 This clock, where the frame also moves with the hands 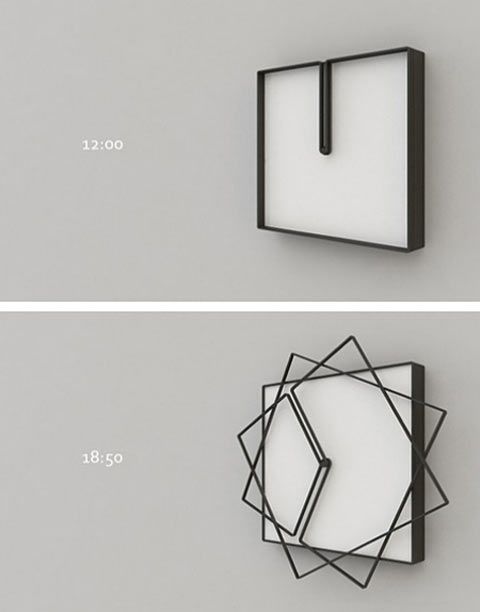 This dynamic piece of furniture 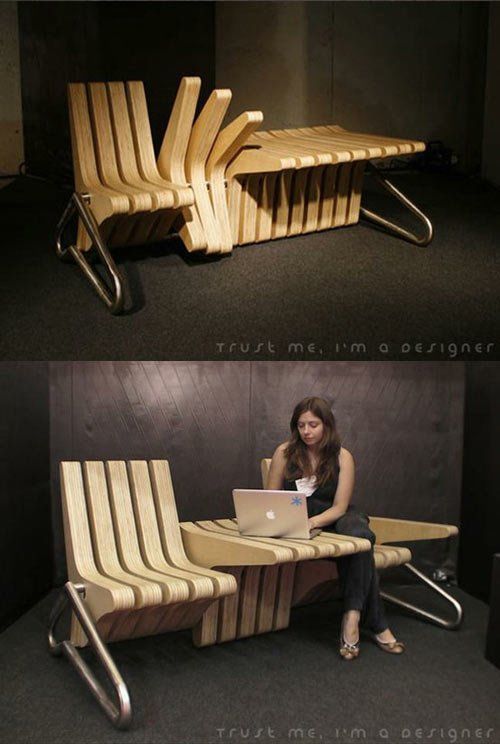 Terraced Bowls. Who knew soy sauce could be so beautiful.

The PIPO chair. (by Alejandro Estrada) Probably the most elegant chair I’ve ever seen.

Look up to see what books the different floor hold. Vancouver Library. Source

Dancing shoes for when you’re tired of your dress shoes. Source

Glasgow architecture school shows you where the bathroom is with descriptive icons.

This armchair knows what you really need. Source

Yes to not hollering over people’s heads at the restaurant. Source.

As a former student of industrial design, it’s often fun to go back and study how other people are currently designing everyday objects around us to be easier to use. Below are a few good ones that I’ve stumbled upon recently.

The Sticky Feet Flex Mount aka Gekkopod by Gal & Boaz Zucker | Works on any surface.

The 160 deg. Socket by Zhoucun Yu | Great for large plugs.

No one expected me to go to art school. Not even I did. I was a bit of a conformist back in high school, taking tons of math and science classes so that I could please my parents and impress my peers. Painting was fun, but art school?

Now that I think about it, it’s probably because I had no clue what art school was actually about. People mostly see and hear about RISD through the media, which means they only get to know it as a place where kids with purple hair draw naked people (albeit, you do see plenty of that as a freshman).

What they probably don’t know about RISD is that it does the most amazing job of taking away fear – the fear of starting, the fear of trying something new, the fear of fear

Art and design push boundaries like nothing else, which is why RISD actually ended up being perfect for me. It made me do a lot of things that I was really uncomfortable with, which in hindsight ended up the best thing I could have ever done.

During my first semester as a freshman at RISD, I was given the assignment to build a violin from cardboard (FYI it didn’t have to work). I immediately started making calculations and measuring angles. The girl beside me simply traced an actual violin on cardboard, building each side as she progressed. Guess who finished first? Not me.

While high school taught me to be methodical about decisions, RISD taught me to hack things together until they worked.

RISD taught me to just start. Make something rough. Make it imperfect. Just make it, because it’ll get you further ahead than the person who’s still “measuring” the perfect way to do it.

I had never worked like this before in my life. Grade school never taught me how to make, so it was my first experience of getting my hands dirty and toying with creation.

During my time in the industrial design (ID) department, I learned how to use a vacuum-form machine, a metal lathe and a blowtorch. If you had asked me high school whether I wanted to play with these machines, I would have probably backed away pretty quickly.

But the courses I took in ID required me to use them again and again, and as a result, they broke my fear of them. I practiced and practiced, until I realized nothing bad was going to happen to me while I used them.

By the end, I had hand-machined slider cranks, built foot pedals for sinks and soldered hollow-construction rings together.

RISD made me comfortable with fear. I became adjusted to trying new things on a regular basis; instead of being risk-averse, I became very risk-tolerant.

When you do this enough, it becomes more than a habit; it turns into an attitude, a mentality that you carry with you whenever you approach obstacles at work or in life. Instead of hesitating and worrying about whether the outcome is going to be perfect, you just dive in and see what it’s about.

While I’m not saying that art school does this for everyone, I am saying that sometimes, you just have to let go. Go and jump into something you’re afraid to do. You’ll look back and wonder why you ever feared it in the first place.