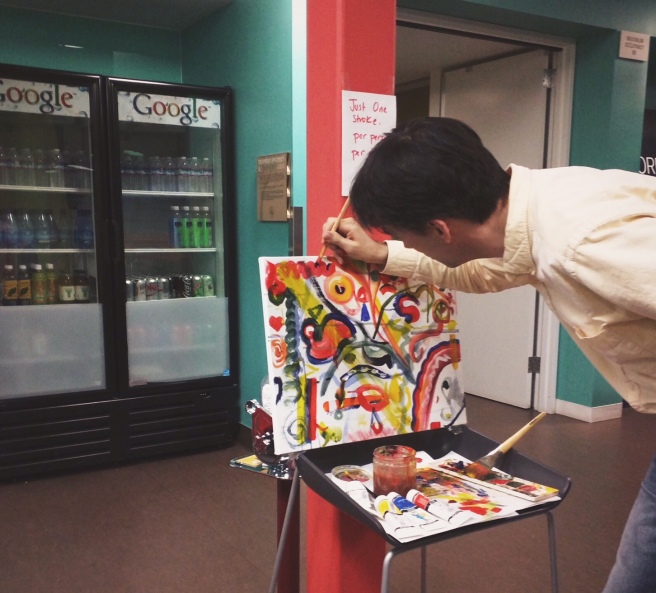 Back in July, I watched as a family walked by a canvas in the local park with the sign “Just one stroke” and stop. They hesitated for a moment and then walked over to the canvas. Everyone made one stroke and then left. It seems really simple – a painting where everyone gets one stroke. But the end result, an accumulation of colorful squiggles, is always a collaborative art event that spawns from curiosity and (sometimes unknown) creativity.

Inspired by the Just One Stroke project started by my friend Rob, I decided to set a canvas up in my office and see what would happen.

There’s always the glance. Oh hey! What’s that? And then the pause. Oh I see. And then the courage to walk up to the canvas. Hm…what stroke should I make? Some people don’t think about it. Others really struggle with the idea of leaving a mark. You only get one. Ok, I’m going to put it there. Next to that guy’s stroke. And then walking back just a little to see where the stroke fit within the whole painting. Cool, back to work.

There were people who completely ignored it, other people who only took to it after a coworker nudged them and some who were incredibly enthusiastic about participating once they realized what it was. The best interaction came from one engineer who told me: “This is cool. I’ve never even mixed paint before. Can you tell me how to much yellow and blue I should use to make green?”